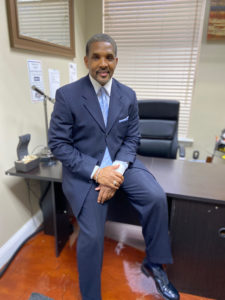 Mr. Jibreel A. Rashad, is Dallas, Texas native and a proud graduate of Wilmer-Hutchins High School. After excelling in the classrooms and high school sports, he attended the University of Texas at El Paso (UTEP) on a football scholarship. Mr. Rashad was an All-Western Athletic Conference Defensive Back while studying Criminal Justice and Mass Communications and would later try out for the N.F.L New York Giants in 1990.

After college and his NFL experience, Mr. Rashad returned to Dallas and began working in Corporate America. This experience would eventually lead him into starting his own company ‘Rashad Investments’. His tirelessly work ethic, passion, determination, and pursuit toward excellence enabled him to become a successful businessman.

Mr. Rashad, has a proven track record for over 25 years in building and growing businesses as well as an uncompromising willingness to achieve greatness which makes him a valuable asset in joining Tax2Go, LLC and ESUME. Mr. Rashad strongly believes in Faith, Family and Community and is committed in giving back to help forward community life while quelling social injustices for all people.